About Equitable Distribution in North Carolina

Absent a separation agreement or settlement, North Carolina courts will decide what is a fair, reasonable, and equitable division of assets looks like. Typically, there is a presumption of an equal division of property between the properties.  The courts may consider any factors that are outlined in the statute on how to divide your property.  The court may consider each factor individually or look at the totality of the factors in dividing your property.

What Property is Included?

Unless an equitable distribution claim is pending at the date of divorce, the right to have your property divided by a judge ends.  Parties have little recourse in receiving pension benefits, property, or contributions for marital debts.  Don’t put off consulting an attorney regarding your equitable distribution rights in North Carolina.

Factors Considered by the Court in Equitable Distribution:

Equitable Distribution is how marital property is divided.

Other considerations in Equitable Distribution

Equitable Distribution is subject to every asset.

Every asset acquired during the marriage is subject to division. Ultimately, the parties may agree or a judge could decide that an asset is marital or separate.  Separate assets must be distributed to the party that received the asset (usually through a gift or inheritance).

Equitable Distribution is not concerned with how property is titled.

The parties to the divorce have the burden of identifying and proving the existence of assets.

The parties must identify, list, and prove any assets they request to be divided.  Documentation, photographs, receipts, or property searches are the best way to accomplish this.

Assets transferred in anticipation of divorce can be considered and divided.

Each spouse is responsible for any debts incurred during the marriage absent an exception.

Any debt acquired during the marriage is presumed marital.  It will be up to the other spouse to prove that the debt was not for a marital purpose.  A marital purpose would be clothing for that spouse, items for the children, bill payments, or dinners out.  Typically, any expenses used to conduct an illicit affair would not be deemed marital.

A judge typically is tasked with four factors when addressing equitable distribution in North Carolina.  Essentially, the judge looks at a snap shot of property and debt that existed on the date the parties separated.  The factors are:

From those four factors, the judge crafts a distribution of the property. 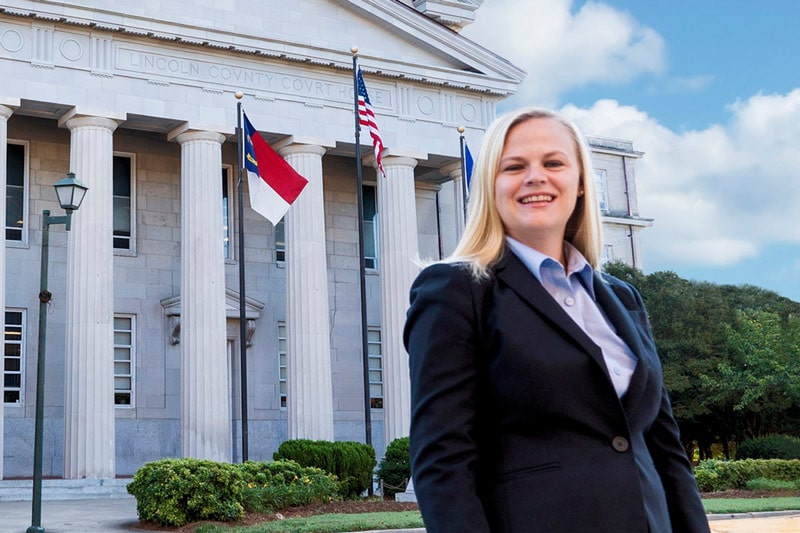 Why Use Lincolnton Family Law as Your Divorce Attorney?

Jennifer Hames is a highly respected lawyer focusing solely on North Carolina family law. Jennifer is skilled at handling complex and highly contentious cases that require an aggressive approach, as well as those who help clients wishing to avoid courtroom litigation through problem-solving and settlement negotiation. Each case is evaluated from every perspective to provide you with customized representation. From the moment you walk in the door, you will know that Jennifer has a genuine concern for her clients’ emotional and financial well-being.

Once a divorce is finalized, certain rights under North Carolina law no longer exist. We are happy to assist you to ensure you understand the process from start to finish and do not overlook any potential legal rights in the process.
Learn More

Child Support is based on parties income. A good attorney will explore any additional income sources, extraordinary expenses, or request a deviation based on your individual circumstances. In North Carolina child custody is determined by using a standard whereby the judge will determine the best interest of the child.
Learn More

An absolute divorce is the simplest part of the process. However, once a divorce is finalized, certain rights under North Carolina law no longer exist. We are happy to speak to you about your individual case to ensure you understand the process from start to finish and not overlook any potential legal rights in the process.
Learn More

What Our Clients Say About Us

I had no light at the end of the tunnel during my horrible divorce before I met with Jennifer. She not only guided me through the process, but I was able to get primary custody of my children and a favorable property settlement. Thank you for giving my case your personal attention and getting me my life back!

Susan
Jennifer resolved my case quickly and inexpensively. She always appeared in court early and ten times more prepared than the other attorney. We won a very complicated case and I would recommend Jennifer to anyone.

Keith
Jennifer answered the many divorce questions I had, worked with my husband’s attorney to make sure to solve our problems without making them worse. Jennifer made sure that there was no more legal work than was necessary and with her low fees Jennifer is worth every dollar. I highly recommend Jennifer and her firm.

Whether your are going through a separation or a child custody matter, it’s important to know what questions to ask when consulting with a family law attorney.  These questions will help you decide which lawyer is right for you and your family. What is your experience in the case?  You want an attorney that primarily

Separation in North Carolina begins the day the parties begin to live separate apart from each other and continues until the parties are divorced.  There are several things that will help a client during the process as well as legal issues to keep in mind. Considering Separation:  Check your finances:  Run your credit report, document

The material provided in this Website has been prepared by Jennifer M. Hames, Attorney at Law for informational purposes only and is not intended as legal advice. Transmission of this information does not create an attorney-client relationship between the sender and receiver. Online readers should not act on information they learn from this Website without first seeking counsel from an attorney about their particular legal situation.

Jennifer M. Hames is licensed to practice law only in the State of North Carolina